Judaism prescribes certain elements of appearance to its followers. In particular, based on the words “do not cut your head around, and do not spoil the edges of your beard” (Lev. 19:27), Orthodox and ultra-Orthodox Jews observe the custom of wearing a beard and growing long hair at the temples, which are called peys (from Heb. peot – lit. “edges”, “corners”).

In addition, Jews are required to use certain items of clothing. It is a pious custom to cover the head permanently. For this, a special cap is most often used, worn on the back of the head and often attached to the hair with a hairpin, called a bale.

About the practice of wearing this headdress, Orthodox Rabbi Yosef Telushkin, author of textbooks on modern Judaism and its popularizer, writes: “According to Jewish tradition, a covered head is a sign that a mighty power is over you.

Today, the head is usually covered with a small cap (kipa in Hebrew) made of cloth. Orthodox Jews always wear a kippah, while conservative Jews wear it in the synagogue and at meals. Many people call kippah in Yiddish – yarmulke, a word of unknown origin, although it is believed that this is an abbreviation of two Hebrew words – yarey meelok (fearing G-d)”. On holidays and Saturdays, a special hat can be used – shtreiml (from the Yiddish letters. “hat”). It is the same kippah, only trimmed with fur, which is why the headdress takes on a cylindrical shape with an elevation in the middle.

Pious Jews wear special tassels of thread attached to the edges of their clothes and are called tzitzit. The basis for this custom is the words from the book of Numbers, where the Lord instructs the Israelites to make “tassels on the edges of their clothes in their generations, and in the brushes that are on the edges they inserted threads of blue wool; and they will be in your hands so that you, looking at them, remember all the commandments of the Lord, and fulfill them” (Numbers 15:38-39).

In addition, there are special items of clothing for worship or private prayer. This is a tallit107 (in Yiddish tales) – a rectangular board, proportionate to the body of its owner. According to historical tradition, they cover the deceased. Brushes are often sewn to the corners – tzitzit.

It is put on the shoulders during the prayer of a man, and the especially pious cover their heads with it as a sign of recognition of the power of God over themselves. It must be made of a uniform woolen, cotton or silk fabric with woven stripes of blue or black.

There is also the practice of using a small tallit (tallit-katan), which is a cloth rectangle with a cutout for the head and tzitzit along the edges. It is worn under clothing by traditional Jews.

Another element of the Jewish prayer attire is tefillin, called in Greek φυλακτη᾿ ριον (lit. “protective amulets”). These are two small boxes made from the skin of a kosher animal. Inside are placed handwritten passages from the Torah, inscribed on parchment (see: Ex. 13:8-9; Ex. 13:14-16; Deut. 6:6-8; Deut. 11:18-19). Men use tefillin during everyday prayers (except for Shabbat and holidays). 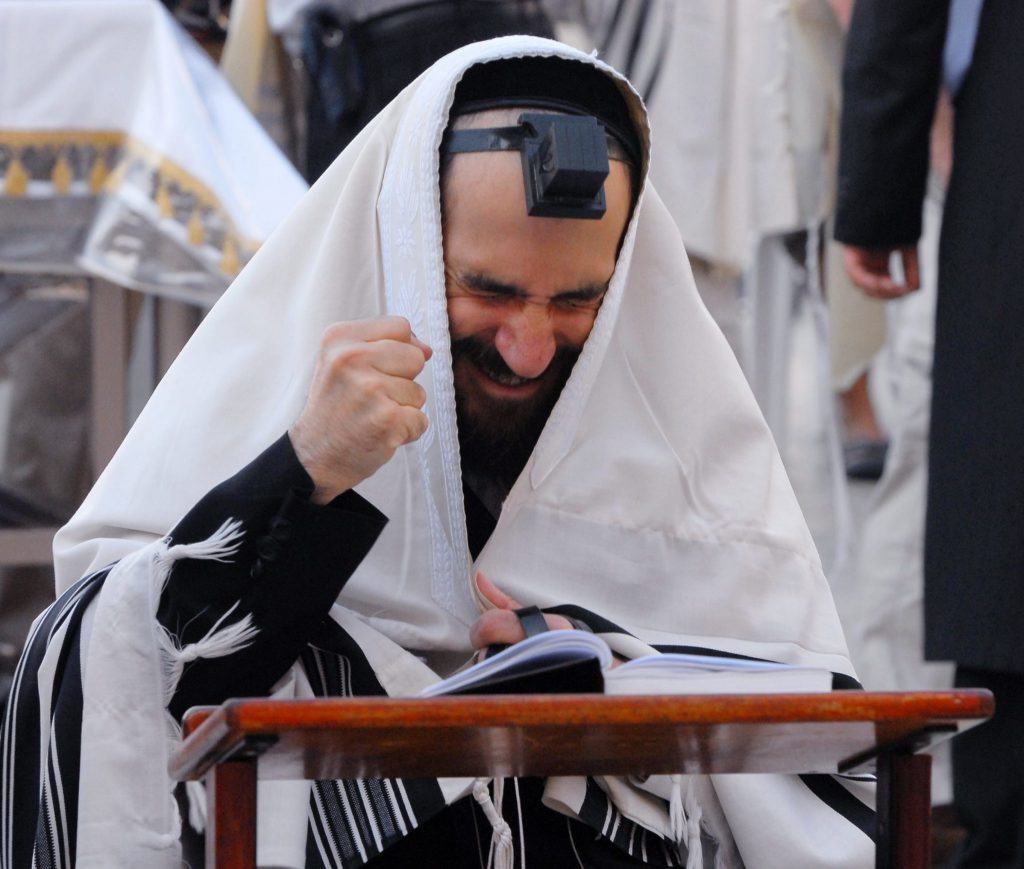 It is fastened with special leather straps on the bare left arm, opposite the heart and on the forehead in the center, in fulfillment of the words of the Law inscribed on the parchments inserted inside, in particular: “Let these words that I command you today be in your heart .. … and bind them as a sign on your hand, and let them be a bandage over your eyes” (Deut. 6:6-8).

As for everyday clothes, which are traditionally associated with the appearance of religious Jews, their style and colors are usually determined by the historical tradition that was formed in the countries of settlement of Jews of various ethno-confessional groups.

Special days, or holidays, are referred to in Judaism by the term moed (from the Hebrew letters, “term”). Holidays usually involve worship in the synagogue with the reading of a certain passage from the Torah, abstinence from work, fun and hearty meals.

Saturday occupies a special place in relation to all other memorable days (see above). All other holidays are conditionally divided into those established in the Torah and later ones.